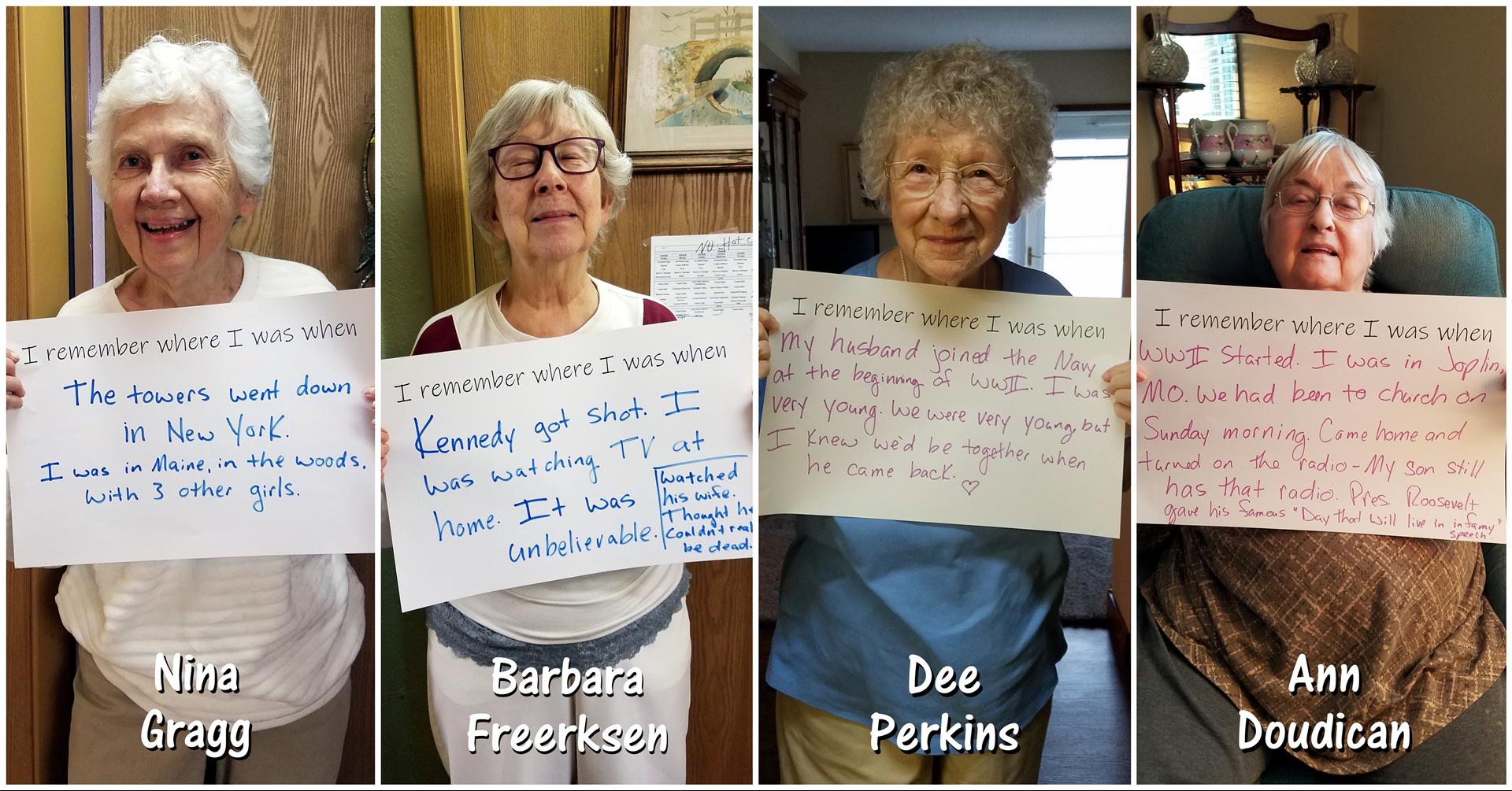 Residents reflect on where they were when…

As we’re all living through COVID-19, which will no doubt become a historic time in all of our lives, Emporia Presbyterian Manor has been sharing stories from residents on Facebook as a way to reminisce and interact with families and loved ones. Here are some of those stories shared by residents who have reflected on other historic events in their lifetime.

“My roommates and I were on vacation in the Bar Harbor area, really isolated in Maine. One of the ladies had an aunt and uncle that rent cabins in the woods. We had no outside communication unless we went up to their house. We got up and everybody got dressed and went into the local town to have lunch and everybody was upset. We didn’t know what was going on. And somebody said to watch the TV and they showed the towers going down. We had no idea at that point. We ate lunch and were pretty depressed, so we went back to the cabin and talked to her aunt. She gave us a radio, and we listened to that the rest of the day. Then we played bridge and called it a day. It was an upsetting time.”

The assassination of JFK — Barbara Freerksen

“I was at home in the living room watching TV. At first, I thought he wasn’t really dead, he was just shot. I remember so well his wife getting on her knees, crawling. I thought she was trying to cover him up so he wouldn’t get hit – protect him from the bullet. It always was a thing that stuck in my mind. I remember the little children and her getting on the airplane with the casket. I remember her having to be all over with the blood on her dress before she could change. It was just unbelievable. I felt so sorry for that lady. I empathized for his wife more than anything.”

“I was only 8 years old when World War II started. I didn’t really realize the implications of it at the time. My father was a Royal Crown bottler. It made a difference in his sugar supply. Our lives changed tremendously. We had just moved into a new home – it was the last house that was built with steel beams in it because of the war. I had a cousin who was at Pearl Harbor when it was attacked. Fortunately, he came back a number of years later. I remember food rationing, those kinds of things, but I was too young to have it affect me directly. I was listening to a radio – which my son still has – with my mother and father. We had been told that something happened, but we didn’t know how severe it was until President Roosevelt came on the radio and gave that famous speech. The whole world was shattered by that.”

Posted on
May 15, 2020
by
Cindy PMMA
filled under
Residents
Back to Blog