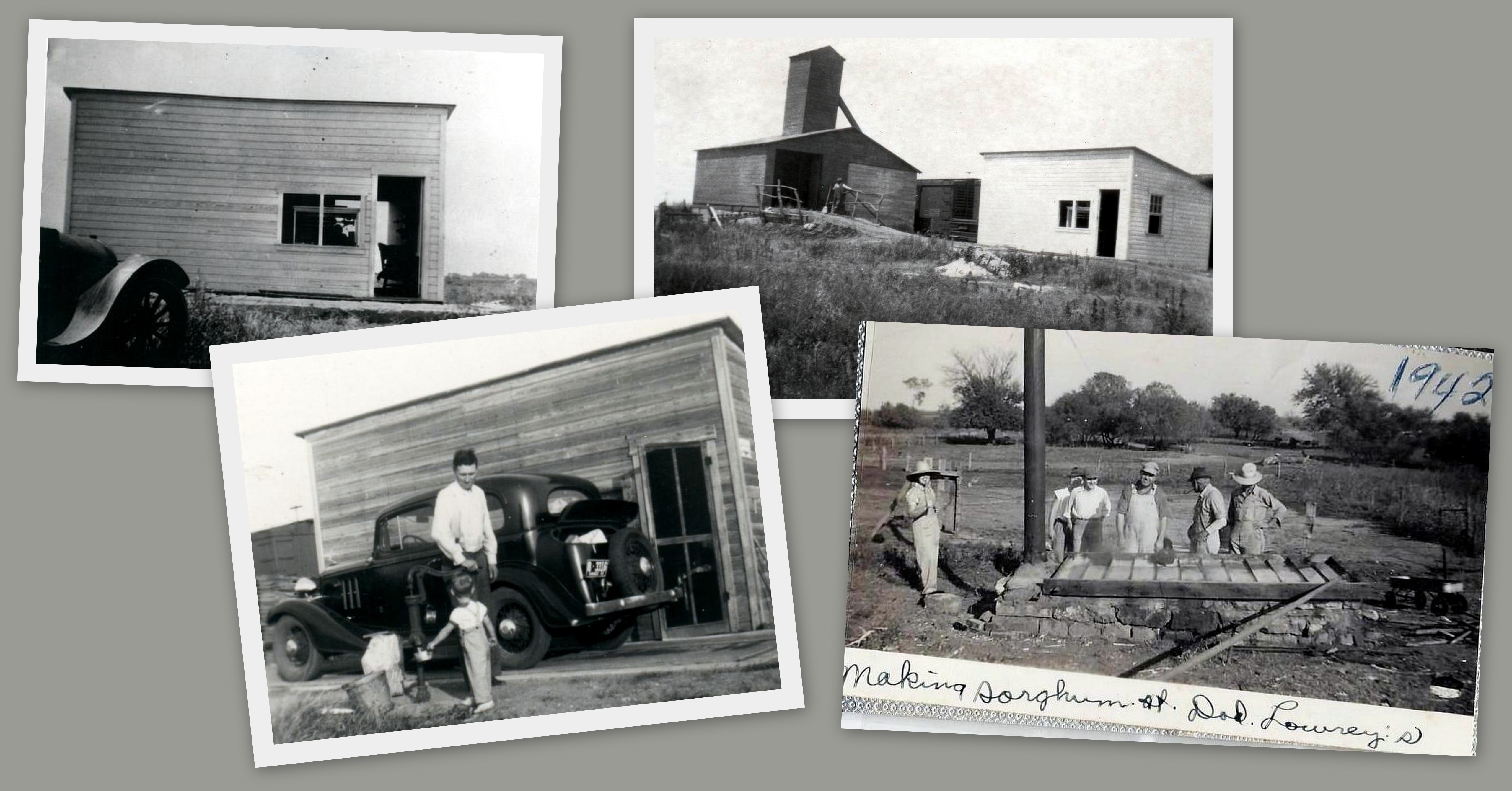 Recollections of the old Hamner Elevator

My father, John Lowrey, grew up on a wheat farm near Argonia, Kan. They took their wheat to the Hamner Elevator where my mother, Helen Callison, was the bookkeeper for her father.

From the first, wheat and cattle were brought to Hamner to be shipped out by rail. Henry Callison (pictured above with his young son, Keith) moved to the farm just east of Hamner in 1910.  Since he had scales, farmers would weigh their wagon loads of wheat there, and then it would be scooped into the train cars.

It was in April 1927 that W. A. Titus purchased lots and the Kansas Milling Co. of Wichita built an elevator. Henry Callison ran the elevator with the help of his daughters, Ruth, Ora, and Helen, who worked in the office for many years. He retired and moved to Winfield in 1943.

Hamner burned down in 1947 and the elevator office and scales were soon sold. The Orient Railroad was sold to the Atchison, Topeka & Santa Fe Railway, who owned this branch line until the tracks were taken up from Viola to Harper in the late 1960’s. When the Hamner whistle signs were removed, Hamner was no more.

Henry and Helen lived in the Hamner Elevator office after Henry’s wife died and he sold the farm. A sheet divided Henry’s bed from the front. Helen slept on a couch that she made up every day.  She cooked on a 2-burner kerosene stove and had a small ice box. Ice was delivered every day. There was a small hand pump for water. There wasn’t an outhouse, so the “commode” had to be emptied south of the elevator in the stockyards. On occasion, the outhouse across the road at the Stogsdall’s farm was used.

Although Sam Lowrey and Henry Callison knew each other and lived a few miles apart, John and Helen went to different schools and did not know each other until the farmer boy took wheat to the elevator and met the pretty girl in the office. In 1939, the farmer boy married the girl at the grain elevator.

Since their rental house across the road from his parents wasn’t ready, John and Helen stayed at the elevator and Henry stayed with another married daughter. Hamner was Honeymoon Hotel.

While I was born at home across the road from my dad’s parents’ farm home, I was raised as a city girl that helped raise food for others in Winfield, Kan.

We raised our own vegetables and canned them for our own use. We also sold sweet corn, tomatoes, and eggs from our home. As a child, I loved to play “hide and seek” with my brother in the sweet corn.  (It seems to me that sweet corn is not nearly as tall as it was when I was a child!)

By the time I was five or six, my mom’s father, Henry Callison, (who lived with us) would pull out his coin purse and ask me to count back the “change” for a dozen eggs. I don’t mind the price of eggs if I don’t have to gather them!

One year the potatoes were extra large and Dad sold them to a potato chip maker. My brother and I were allowed to see the potato chips being made.

After I was married, my parents moved to a small acreage (still in city limits) and sold sweet corn, tomatoes and other vegetables in the barn.

John Lowrey was very well known for his “sweet!” sweet corn and driving his little Ford tractor all around Winfield, plowing gardens for other gardeners.

Posted on
June 23, 2021
by
filled under
Residents
Nostalgia
Back to Blog