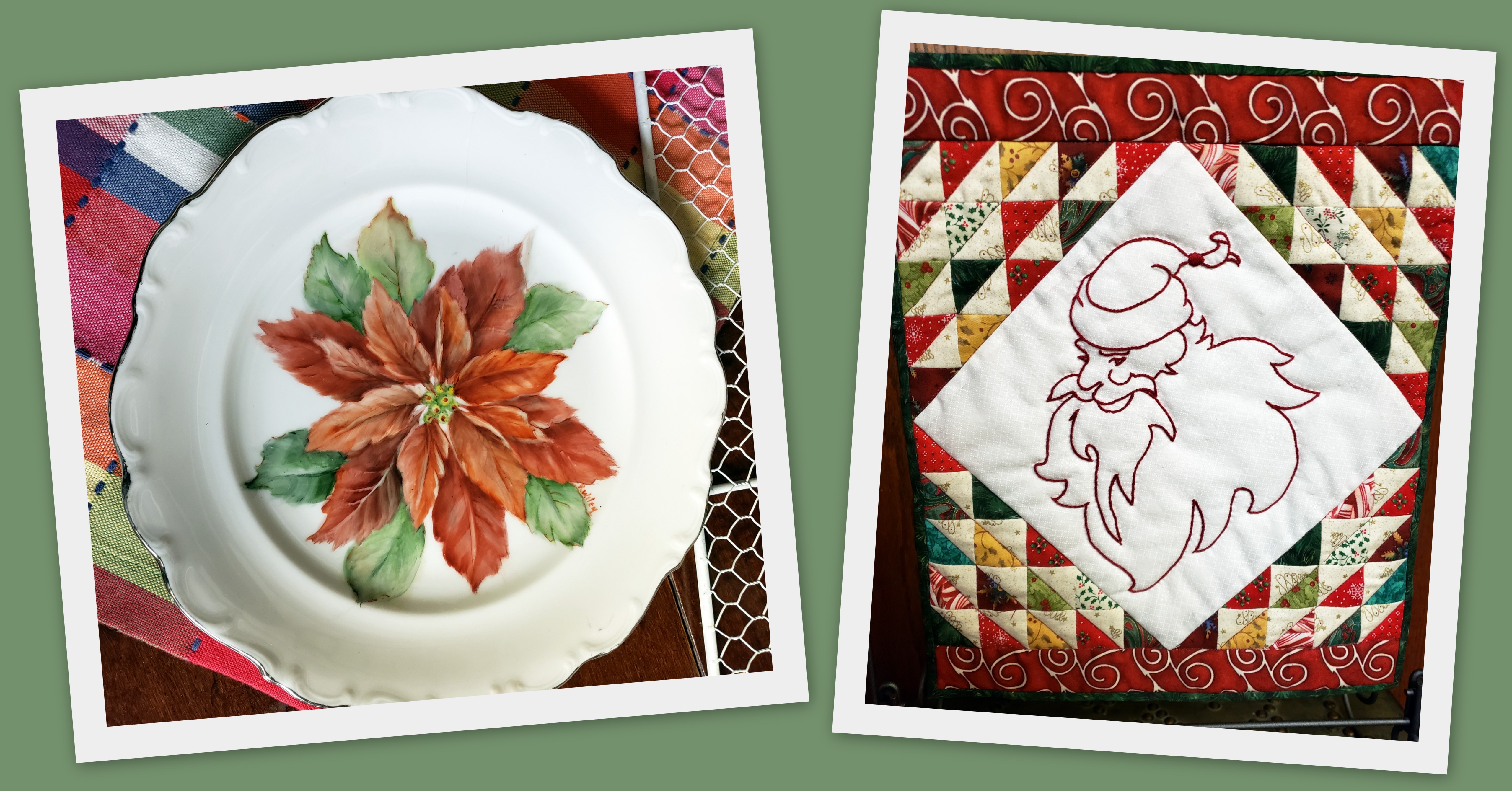 Residents Joan Butts and Karen Wiley not only have Christmas spirit but a whole lot of artistic talent. Both women, who are neighbors in the duplexes, had pieces that won honorable mention in this year’s Art is Ageless competition in the Christmas category.

Joan Butts has a passion for quilting. She took her first class in 1984 after seeing a class advertised and she wanted something to do in her free time when she wasn’t working in the school district.

“Quilting is very relaxing. I like doing things by hand. I do hand piecing, applique, quilting, but I do machine work, too. To me, I can get lost. It’s like people getting on the computer and realize three hours later, ‘where did the time go?’” said Joan.

Joan’s quilts have been entered in the Art is Ageless competition for three or four years. This year, she had three winning entries, including her Christmas entry, a quilt she called “Santa,” shown above.

“I was very pleased and shocked when I heard I won! I have a quilt on a calendar page, a wall hanging on a postcard and this Christmas piece in the honorable mention. I will get a calendar for everyone!” said Joan.

Joan’s family is familiar with her nature to give. One year for Christmas, she made quilts for her four nieces. And another Christmas she gave every immediate family member something she had quilted. It took her several years to get everything made – she has three children, five grandchildren and four great-grandchildren.

One of her favorite Christmas traditions involved making something else by hand. “When my children were growing up, we made a big deal of making Christmas sugar cookies. I had lots of cookie cutters. We baked a lot of cookies, and that’s something I cherish,” said Joan.

Her favorite holiday dish is a friend’s recipe for date pudding and her favorite Christmas carol is “‘O Holy Night.”

Karen Wiley, Joan’s friend and neighbor, moved to Emporia Presbyterian Manor last year and competed in Art is Ageless for the first time this year. Her entry, “Poinsettia 1,” is painted porcelain and shown above.

“I started china painting in 1967 when my husband gave me a Christmas gift of china painting classes. I had never painted at all before and was seven months pregnant with my second child, so I don’t know what possessed me to start at that time,” said Karen.

While china painting is becoming a lost art, Karen has enjoyed teaching others how to do it in the past and hopes to teach classes in Emporia in the future.

“The age of the china painter is getting up there, and we’re losing an awful lot of painters. It’s a long learning process, but there are things you can do very simply for beginners and we always tell everybody, and it’s true, that anybody can do it. You just work in stages and try different things,” said Karen.

She was “very excited” when she heard her entry won honorable mention in this year’s AiA competition.

“I think there had been one other china painter here at Emporia Presbyterian Manor many years ago and I remember her telling me she had a piece chosen for the calendar. I knew it would be possible, so I thought I better enter!” said Karen.

She also shares her talent with others, especially during the holidays.

“The thing I love about porcelain art is it makes such personal gifts because you can personalize anything – names, dates, something meaningful, maybe a scene. I have stuff painted for every holiday and something in between. I also paint Christmas ornaments for my grandkids every year – I was five grand kids and one great grandson. I plan to keep that up,” said Karen.

She also plans to continue a special Christmas tradition just for her.

“Since my husband of 43 years passed in 2004, I started a new tradition for me. My Christmas tree has a new angel on it every year in memory of him. My tree is all decorated in angels, crystals and pearls so it’s mostly white. I don’t put just any angel up. It has to speak to me. To me, that’s really important,” said Karen.

Karen usually enjoys big family dinners for the holidays. She’s famous for making desserts and one of her favorites is a tart cranberry pie. While she likes Christmas music of all kinds, her favorite carol is “Winter Wonderland.”

When Karen and Joan aren’t working on their next art project, the two enjoy walking with other neighbors when the weather is nice.

“We’ll walk up to the gazebo, visit for an hour and walk back down. We’ve always found a lot to talk about,” said Karen.

Joan added, “It has really been nice to have the companionship, especially during this time. Those of us out here in the villas haven’t been allowed in the Manor since March. We might not like to be so locked down, but it’s for our own good. You make the best of it and have to keep a positive attitude.”

Posted on
November 22, 2020
by
filled under
Residents
Holidays
Back to Blog